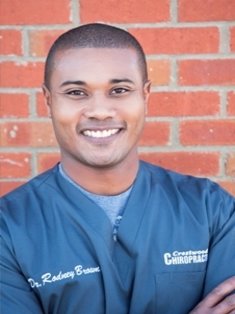 Dr. Rodney Brown was born and raised in Ontario, Canada. After receiving chiropractic care for an injury he sustained in university, Dr. Brown decided this was the career he wanted to pursue. He completed his Bachelor of Science degree at the University of Waterloo, in Ontario, before heading to Logan Chiropractic College, in St. Louis, Missouri.

After marrying his high school sweetheart, Tegan, in 1996, they moved home to Canada where he completed his doctorate degree at the Canadian Memorial Chiropractor College, in Toronto. He graduated in May of 1999.

After settling close to extended family and building a chiropractic business in Guelph, Ontario, for five years, Dr. Brown decided he had had enough of the cold Canadian winters and moved south of the border with his family. He, his wife and his two children, Quinn and Dante, have called Crestwood, Kentucky, home since 2005.

Dr. Brown opened Crestwood Chiropractic in March of 2005. His family-friendly office has grown significantly over time! His mission has always been to ensure that each and every one of his patients receives the “Disney” experience as they make their way through his office. He provides a variety of chiropractic adjustment techniques depending on his patients’ needs, including both hands-on manipulations and hand-held instruments.

Crestwood Chiropractic also offers a variety of additional therapies such as: