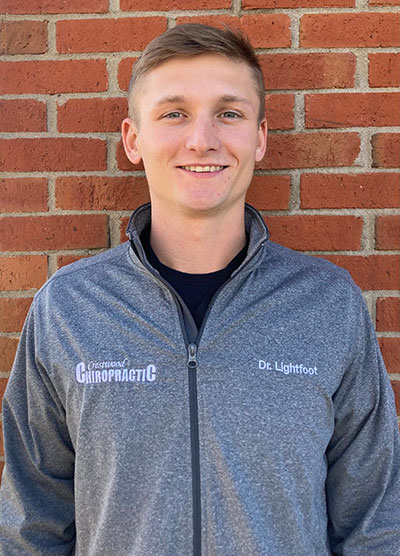 Dr. Chase Lightfoot was born and raised in Bowling Green, Kentucky, before moving to Crestwood and graduating from South Oldham High School in 2014. He then attended Hanover College in Madison, Indiana, where he was an active student athlete on the football team all four years, and earned a degree in Kinesiology Integrative Physiology. Dr. Lightfoot obtained his Doctorate of Chiropractic in 2021, attending Logan University in Chesterfield, Missouri. At Logan, he was involved in several clubs including the Motion Palpation Institute, Rehab 2 Performance, and Sacral Occipital Technique (SOT).

In his free time, Dr. Lightfoot is an avid disc golfer, football junkie, and a diehard Pittsburgh Steeler’s fan. He loves spending time with his family, friends and fiancée, Paige, a fellow Chiropractor. After attending post-secondary school in other states, Dr, Lightfoot is excited to be back in Kentucky, planting roots close to family!